I’m on this kick lately where I want to be a positive, happy, kind person. Emphasis on ‘kind’ because that’s the main goal I’m working on. Kindness towards other people, but also kindness to myself because I believe you must take care of yourself in order to be able to help others.

My mind hasn’t always been a pleasant place, but more than unpleasant, it was unsafe. While I curled up in fear of other people, in truth I was my own worst enemy by a long shot. I’m working really hard to clean up all the mess up there. It’s a slow, tedious process but I am beginning to see changes!

One of my strongest methods of self-sabotage is anxiety. Until recently I pretty much allowed my anxiety free reign in my life and completely indulged its every whim. Avoid social interactions? Why, yes! Walk a different direction in the store to avoid an interaction? Already headed the opposite way! Why should I hang out with those people? You know they don’t really like you anyway! That person was quieter than usual today? They obviously don’t want you around.

Unmanaged, my anxiety had taken over and controlled my entire life. In the South we have something called kudzu (Japanese arrowroot). It’s an invasive vine brought here voluntarily back in 1876 to control soil erosion. As you can see in the pictures below, kudzu is quite prolific and, left alone, will take over any and every thing in its path. This is kind of what I picture was happening with my anxiety.

Anyone who deals with or has experienced anxiety on a regular basis knows it is a battle. I use the word ‘battle’ because there are no rules and no fair play. Anxiety can come out of the blue and attack whether you’re ready or not. It appears from unexpected angles. It knows your weaknesses better than you do.

Every single day I battle my thoughts. I battle my emotions. I battle my perceptions. Sometimes one at a time, and sometimes all together. Even this is progress though, because there once was a time I didn’t fight them at all.

I can give you a perfect example of anxiety from just this week. I’ve started back to college and my first classes were Monday and Tuesday. Everything is now handled via internet so on Monday I logged into my school account to make sure nothing had changed with classroom numbers and such. I was taken to a screen I wasn’t familiar with and discovered the teacher of my first class (Monday night) had already sent an email and made an assignment. The first ‘assignment’ was to ‘like’ the email she sent and add my name to acknowledge I’d received it, only…..there was no ‘like’ button to be found on the entire site. Panic mode.

Suddenly every story that’s run through my mind about going back to school at 40, and all the uncoolness from my high school experience in general, started playing in my head on repeat. Ohmygod, you’re already embarrassing yourself! What an idiot! I bet all those 19-year-olds can find the ‘like’ button!! Why do you always embarrass yourself?!? This is why you shouldn’t be in school at your age. You’re gonna be sitting there looking like everybody’s mama in class. What were you thinking?!?!

I knew I had to do something though, so after a solid five minutes of beating myself up I responded to her email with my name (minus the imaginary ‘like’). Next was the assignment – For 100 points, write down what psychology means to you. Anxiety. How do you even do an assignment these days?? It says “legibly” does that mean I have to write it? What if I type it? Typing is neater. Does that make me a nerd? I’m typing it. How do you even lay it out? Do I put my name at the top? I DON’T KNOW WHAT TO DO!! I’M TOO OLD!!! After typing it up: 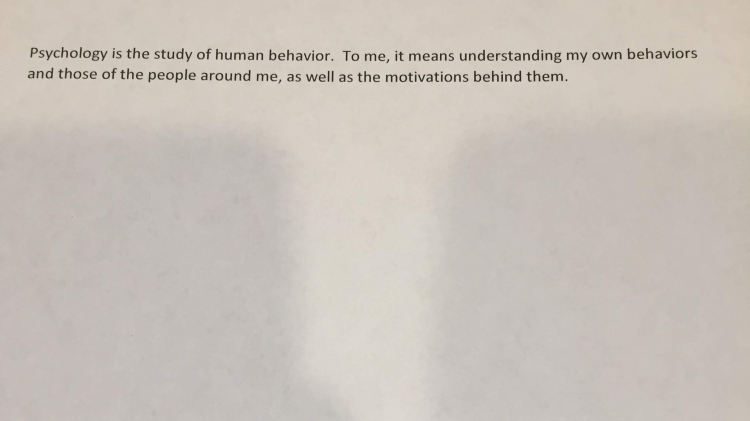 Waste. Of. Paper. And after all this? The entire class was cancelled for the day.

Then it’s Tuesday night and I have math class. I wasn’t as nervous this time. I didn’t spend a lot of time worrying about what to wear like I had the night before. I’m doing pretty good so far!

Then the teacher starts teaching….

It’s literally been 10 years since I was in a math class (I took Math 99 or something on a whim years ago). I did really well in that class, but I mean it when I tell you I’ve forgotten every single thing about it. So after his introduction the teacher walks to the board and writes some kind of -3x + 42 = y and told us to “find y”.  I’m telling you it took every ounce of willpower I have not to get up and walk out that door. Well, you are lost already. You shouldn’t have done this. What made you think you could return to school? You’re old!

For the first 20 minutes or so of his teaching these are exactly the thoughts that ran through my head. So what do you do when this happens? How do you make it stop?

Here are some ways I’ve learned to cope with my anxiety:

1.  Prepare for a Battle. Know yourself. Where are your weaknesses? What are your triggers? Triggers can be anything from a new situation to a big crowd to an aggressive, outgoing personality. Find those soft places and brace for impact. Listen to the stories you tell yourself, and then learn what the truth is.

In the story above, I knew what I was telling myself leading up to class. I’m too old to return to school. I’m going to be laughed at. It’s going to be just like high school.  I’m horrible at math.

So when the panic came as I was looking at the teacher’s email, it got out of hand for a few minutes but then I started to reign it in by replacing those thoughts with the truth. I can do this. I’m not too old. I can figure this out.

2.  Acknowledge the Source.  Most, if not all, of the anxiety I experience is caused by unfounded fear. In the story above I was doing a new thing, with new people, and I was unsure of myself. Of course I was scared! This is where my anxiety starts rubbing its hands together with an evil grin and tries to get a foothold. However, knowing these thoughts are fabricated by fear and not reality makes it easier for me to fight the negative thoughts with positive, truthful ones.

3.  Force Your Focus.  Most people with anxiety are hypersensitive. I mean, I catch every change in tone, every facial expression, every look. My anxiety uses these things against me. Flip that around and use it to your advantage.

What you’re looking for is what you’ll see. Pay attention to the things that don’t support your fear instead of the things that do. It’s all about replacing the ‘story’. So when you notice someone is quieter to you than usual and later you find out it was because they’d had a really late night and not that they were wishing you’d fall off the face of the planet, make a note of that. Next time they’re quiet and those thoughts creep up, remind yourself that last time it had nothing to do with you!

4.  Change Your Thoughts.  Give your brain something to ‘chew’ on besides those negative thoughts. Pay attention to what’s running through your mind. When you catch yourself in a negative spiral, replace it. I am enough. I am smart. I forgive myself. I can do this. My friends love me. My family loves me. I am loved. I can write. I can make an ‘A’ in this class. Make your own to replace whatever floats through your mind.

I started off writing mine down. Over and over and over in this little notebook. Writing felt more powerful to me than repeating them in my mind. Then I started saying them out loud on my way to work. A little later a friend of mine told me about people like Les Brown and Eric Thomas on Youtube and I started listening and watching videos.

It felt strange, even false at first. Eventually though, I got used to it and it wasn’t strange anymore. When I did, I added on. You know what happened? The mess in my head started clearing up. The ‘battles’ became easier to fight.

A few weeks ago I was going to meet with someone that, for whatever reason, I was really anxious about. I’d avoided it for two months. Driving over I could feel the nerves kicking up so I turned up the speakers and me and 2Pac had a fun little concert together the whole way there. (Now, 2Pac will have me getting out of the car looking for somebody’s ass to kick sometimes, so kind of keep yourself in check with the attitude.) When I got there I felt much better about myself and wasn’t half as nervous as I’d been earlier, all thanks to 2Pac.

If rap isn’t your thing, watch a video on Youtube. Les Brown and Eric Thomas, who I mention in #4, are both powerful motivational speakers. Tony Robbins is another. Lisa Nichols. Mel Robbins. There are so many. Find your favorite!

The majority of the time will it truly matter if that person you’re worried about likes you? No. If you’ve lived any amount of time at all you’ve already survived someone not liking you. You’ll survive this one too.

If you look silly in front of that group of people, is it really going to ruin your life? No. It might be uncomfortable, but it will pass. Laugh it off! My favorite people are the ones who are able to laugh at themselves.

7.  Stop the Bleeding.  It’s unfortunate, but at the end of the day, sometimes you have to admit some people are just not good for you. That doesn’t necessarily mean they’re a bad person, though it can. Maybe you’re in too weak of a place and they’re a little too harsh and unforgiving. Whatever the case, it’s time to do some serious thinking about it.

If someone makes you feel bad about yourself purposefully or not, sit down and have an adult conversation about how they make you feel and why. If they’re truly that good of a friend when they understand what they’re doing, they will stop. If not, unfortunately you will sometimes have to let those people go, or at least put some distance there. It’s not worth your sense of self-worth or confidence.

By the way, after the twenty minutes of beating myself up in math class Tuesday night I refocused my thoughts and changed the ‘story’ I was telling myself.  One by one those little math rules I’d forgotten started coming back to me and by the end of the class I knew if I got those down and did my homework I would be just fine.  In fact, I might just get an ‘A’ at the end of all this!

I hope this helped at least a little bit.  Wishing you all a fantastic day free of anxiety and filled with love, given and received!

2 thoughts on “Thoughts for Thursday” 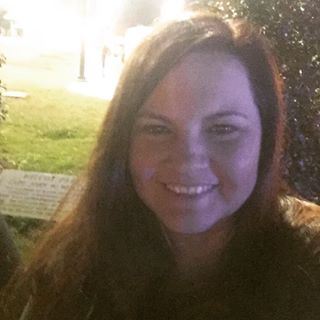