This is not a paid advertisement.

I mentioned in a previous post that I’d finally decided to sign up for a meal delivery service.  Yesterday was the big day!!

So, a few things to know about me:

It was actually a lot more reasonably price than I expected.  One week costs about $60 for three meals with two servings each.  This is around the same cost for my regular groceries every week which doesn’t always mean I’ll get three solid meals out of it.  For me, I felt like the cost was pretty good!

I received an email notice Tuesday that my box had shipped.  I’m pretty sure I’ve never been excited to get home for any reason that involved me cooking, but yesterday was that day. Soooo excited!!

I pulled up at my house and the delivery was waiting as promised!! 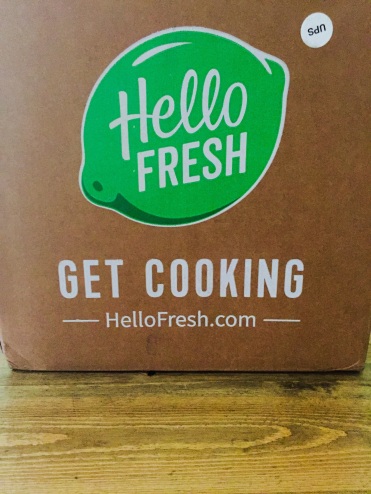 I mentioned before that I was able to go on the Hello Fresh website and pick which meals would be sent.  Of the eight options offered I chose Crispy Top Parmesan Chicken, Cherry Drizzled Pork Chops, and Crispy Baked Cod.  Part of my excitement was finding which of the three choices they’d send first.  I didn’t realize they all come together!

I’ve decided this is actually a plus because I can cook whenever I want, and choose what order to cook as well. 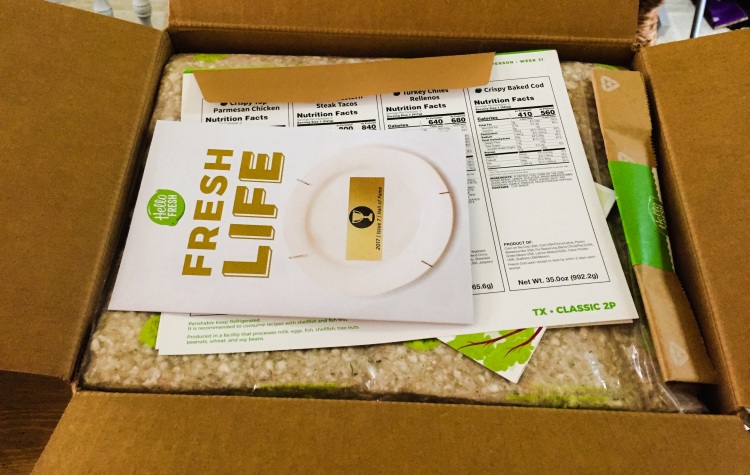 Lots of paperwork.  But one feature I really liked… 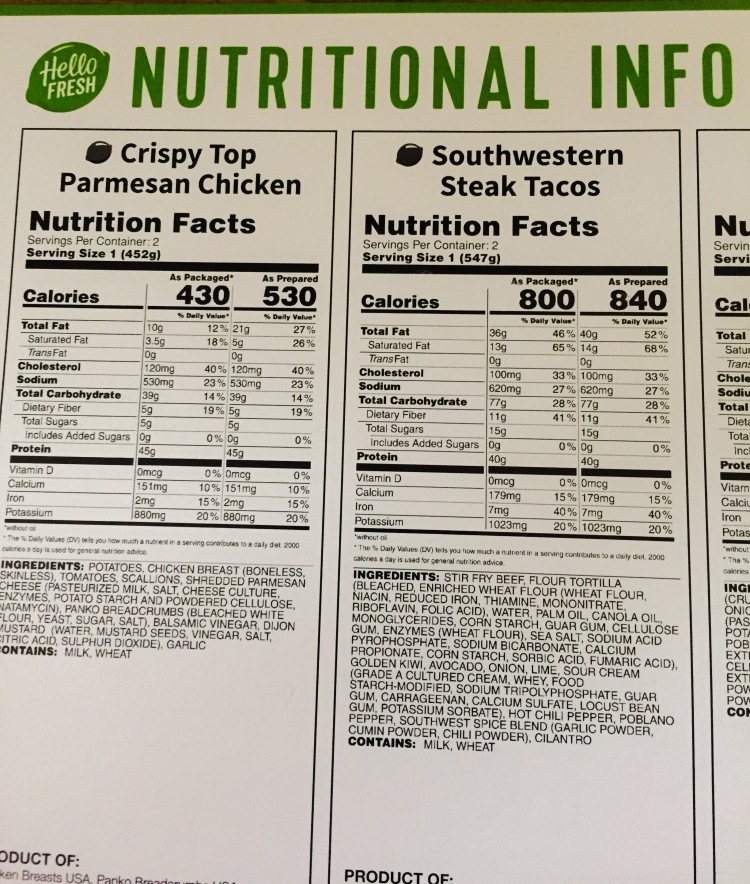 A big sheet showing the nutritional information.  There were also large sheets with the recipe for each of the three meals included (that I didn’t get a picture of). 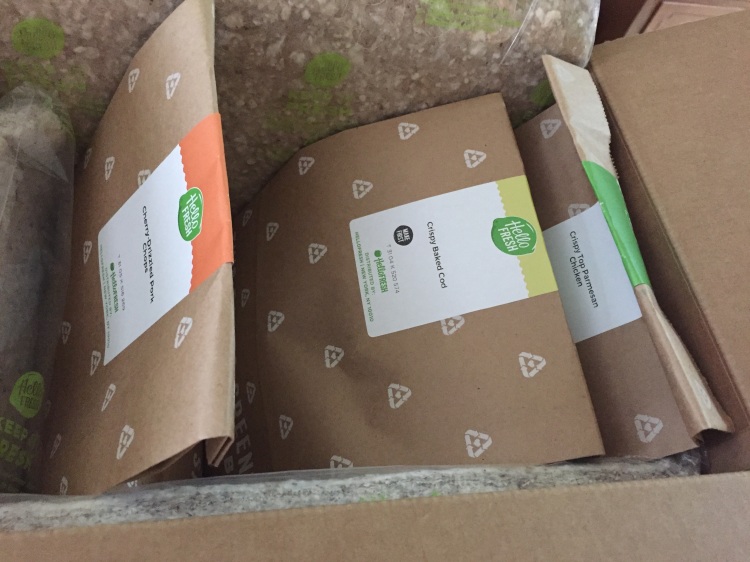 You can see everything was clearly marked, as well as neatly and safely packaged.  Below that bottom part were ice packs where the meats were kept cold.

Again, I thought they did a beautiful job of packaging everything.  It all looked like fresh, quality ingredients to me.  Conveniently packaged with just the right amount I needed for the meal.  All the produce was fresh, as if I’d just picked it up at the local farmer’s market.  Nothing about it made me feel like it had come in a box.

The giant recipe card was broken into 6 steps.  At first glance I thought things might go south quickly without instructions to essentially hold my hand.

Upon a closer look I realized there was exactly enough detail – even for a rookie cook like me!  Well laid out for each part of the meal so that everything kind of rounded up at the same time in the end.

You see those tomatoes??  That was a side to the chicken, along with a balsamic potato salad.

I almost didn’t bother with the tomatoes at all, but I reluctantly talked myself into it am an adult so I try new things.

As a backup I cooked some peas I had in my pantry.

This is where I did my usual ‘I got this’ and just knew I could take it from here.  This is never the case so I’m not sure why I think this every. single. time. but I do.

The recipe said to use the white part of the onions with the tomatoes.  I used the green.

Be distracted by Look at the pretty colors though!!

The tomatoes were roasted, but at the end of the suggested time I thought they still looked like regular, raw tomatoes.  Too much so for my taste.  I’m stepping out, but not that far!!

I put them back in the oven by themselves and checked them every 3 minutes until they looked cooked enough for me to try one eensy, tiny bite in the spirit of adulthood.

The chicken was fantastic!!!  I cooked the potatoes and tested them for doneness, but I should have left them in a little longer.  Otherwise they would have tasted awesome!

As for my nemesis, the tomato, I did try one eensy, tiny bite.  And then I ate the whole serving!!

I was so pleased with everything.  My one complaint, if there was one, is I didn’t think there were enough tomatoes included to make two servings.  Other than that, it was truthfully one of the best meals I’ve cooked in a while.